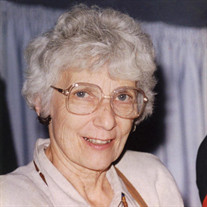 Annette Jackson “Mitzie” Young died on December 5th, 2021, at the age of 101, at Jackson House assisted living facility in Boston, VA where she lived for several years. She was born October 29th, 1920, in New York City to Ann Brust Jackson and Benjamin F. Jackson. She received her B.A. from Cornell University and earned her master’s degree at the University of Chicago. She lived briefly in Binghamton, NY during WW2, then settled in the Washington, DC area where she worked as a Psychiatric Social Worker. She met and married Dr. William H Young, Jr, who was in psychiatric practice, and they raised their family in Alexandria, VA. Mitzie and Bill were blessed with four children and Mitzie's greatest aim in life was to provide for their needs and see them succeed. She did her best to instill in each of them a moral compass, a sense of social justice, and compassion for others. Her holiday table included not only her family, but any friend or acquaintance who might otherwise be alone for the celebration. She had an innate sense of fairness that made her the advocate for anyone in trouble or need. She was active politically and unapologetic about her liberal values. She and Bill bought, loved, and built their dream house on a farm in Castleton, VA. After many happy years on the farm, they downsized to a home in Washington, VA, where she worked for Real Estate III as a real estate sales associate. Mitzie felt that she lived in one of the most beautiful places on earth, and she did her best to defend her beloved Rappahannock County from unnecessary development and any sort of environmental pollution. In support of agriculture as a vocation for the youth in the county, she, along with her husband, were instrumental in establishing the Farm to Table program at the high school. She was a great reader, and if she liked a book, would give or send it to someone she thought would appreciate it. She had a fine intellect, an acerbic wit, a direct manner, and played a vicious game of scrabble. She is survived by her children Arianne Young of Harrisonburg, VA, Dr. Kevin Young (Ellen) of Plymouth, NH, Michael Young (Shirley) of Culpeper, VA, Lorraine Ducharme (Daniel) of Fairfax, VA, and five grandchildren, Christopher Young, Lauren Young, Andrew Young, Michael Young, Jackson Ducharme and four great grandchildren. Memorial contributions may be made to RLEP, P.O. Box 94, Washington, VA 22747. An online guestbook and tribute wall are available at www.foundandsons.com Found and Sons Funeral Chapel of Culpeper is serving the family.

The family of Annette "Mitzie" Jackson Young created this Life Tributes page to make it easy to share your memories.

Send flowers to the Young family.